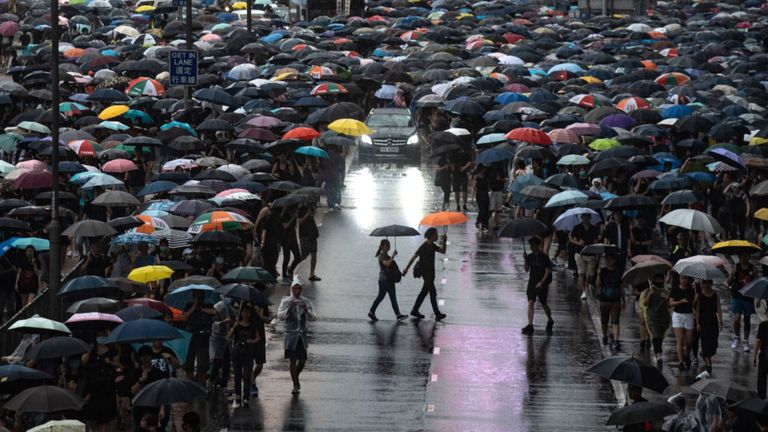 As we mentioned on Sunday, we want to suggest at least three things which we must keep central as we think about the protests:

One of the things that the devil would love to do during the current situation in HK is to bring division and disunity to the church family and to households. It is so easy for people with opposing views, who see things differently or who support different sides to view those who differ with them with suspicion, anger, betrayal or even hatred. The church family can so easily become divided as our hearts grow hard towards those with whom we disagree. The consequences of that happening will be just disastrous. Let us remember that our primarily identity is that we brothers and sisters in Christ, with God as our Father, united by the Holy Spirit.

Prayer is one of the hardest things to do because we seldom see the results straight away: it requires great humility to pray because we have to trust God with the results. But prayer is also the most powerful weapon in the world. God, in his wisdom, has ordained that prayer really does affect the history of the world.

In the sixteenth-century in Scotland, there was a pastor and theologian by the name of John Knox, but He was also a man of great prayer. At the time Queen Mary said that she ‘feared the prayers of John Knox more than all the assembled armies of Europe.’ She said this because she knew not only that he was a man of great prayer, but that his prayers were powerful – more powerful to effect change than all the armed forces and political powers of the known world.

Watermark, can we commit to praying for Hong Kong, our leaders and all those in authority on a daily basis? It’s easy to pray according to our own will or according to our own opinions of what should or shouldn’t happen, but Christ calls us to pray “let it be in Hong Kong as it is in heaven.” As we pray, let us confess our own sin where necessary (Matthew 6v12). Let us pray for Christ’s will to be done (Matthew 26v39), for peace and for our leaders and all in positions of authority (1 Timothy 2v2). Let us pray for Christians to be Salt and Light in this time (Matthew 5v13) and for unity rather than division (Psalm 133). Let us pray for justice and righteousness to prevail (Micah 6v8) and for the poor and marginalized to be cared for and not neglected (Galatians 2v10). Chris has written an outstanding prayer for us to pray at this time which can be found here.

Esther 4v14: “For if you keep silent at this time, relief and deliverance will rise for the Jews [God’s people] from another place, but you and your father’s house will perish. And who knows whether you have not come to the kingdom for such a time as this?”

God in his sovereignty has ordained each one of us to be in Hong Kong for such a time as this. This is an incredible moment in our city’s history for the gospel to advance, for people to find Jesus and for us to be Salt and Light to our city. Right now our city is looking for hope and longing for peace. So many in our city are feeling hopeless and are anxious. As Christians we know that no political or economic solution is going to give the peace or the hope that people long for; these are only ever found in the One who made us to know him and find our rest in Him.

Jesus said “You are the light of the world – but don’t hide your light under a basket – let it shine. You are the salt of the earth, don’t try and water-down your saltiness; but let it be experienced by those around you.”

Watermark, as individual followers of Jesus and as a church family we’re here for such a time as this. The Apostle Peter – writing to Christians who were facing life-threatening opposition and oppression – encouraged believers “to honor Christ the Lord as holy, always being prepared to make a defense to anyone who asks you for a reason for the hope that is in you; yet do it with gentleness and respect” (1 Peter 3v15). Let’s do the same. Let us carry Jesus in our hearts but also on our lips. Let us always be ready to share with anyone who will listen that our hope is found in Christ alone. Watermark, we’re here in this city, for such a time as this.

Dear Watermark,
Church service will proceed as normal this Sunday but with some precautions to help prevent the spread of germs. Please wear and keep on wearing a mask (if you do not have, we can provide) and wash your hands regularly. Everyone will need to have their temperature checked. If you have been to the mainland, or have been exposed to those who are sick, please do be considerate and self-quarantine. During this time, we need to be sensitive to those that are hurting or fearful, and we need to take care not to spread the virus, but let’s also be Salt and Light in the way we do that. Let’s take care of ourselves but also seek to take care of others.